Previous: What is Herbal Tea?

Next: Health Benefits of Herbal Tea

How was tea invented?

One legend says that, in the year 2737 BC, the Chinese Emperor Shen Nung noticed that a green leaf had blown into a bowl of boiling water, colouring the water and creating what became known as tea. … Tea is first mentioned in Chinese documents some 4,700 years ago. It follows that tea probably originated in China.

Herbal teas have been around for nearly as long as time. With our ancient ancestors making infusions of the plants, roots, and herbs they saw around them in their native environments. Documentation of herbal teas goes back as far as ancient Egypt and China, where texts have been discovered describing the medicinal benefits of drinking these herbal concoctions. 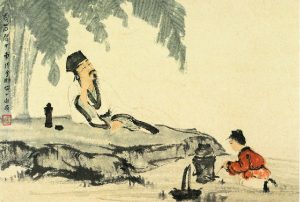 China is deemed the country of origin

In the 1st century AD, the legendary Greek physician Dioscorides described more than 600 medicinal plants, many of which could be steeped in water to create healing infusions. Additionally, modern researchers have found dried peppermint leaves in several Egyptian pyramids, which date back to 1,000 BC. Experts believe these were used to aid in digestion.

According to ancient historical records, these herbal blends were used not only for their physical health benefits, but also for their ability to invoke a sense of calm and spiritual awareness. Over time, humans began drinking herbal teas simply for their wonderful taste and aromas.

The practice of using dried herbs, flowers, fruits, barks, and other ingredients for wellness continues today. Many Citizens use herbal teas to support a healthy mind and body.

Resulting from an increased health awareness of the consumers, drinking herbal and fruit infusions started to boom in the 1980’s.

Previous: What is Herbal Tea?

Next: Health Benefits of Herbal Tea

(Visible Here ONLY FOR TRAINING REVIEW)

How useful was this lesson?